Despite huge challenges faced by the pole and line tuna industry in Indonesia, the government, national and international organisations, donors and NGOs are working together with fishermen, processors and exporters to increase fishing productivity and to fulfill the criteria for eco-label certification. The collective (and achievable) goal is to see more high-value P&L Indonesian tuna sold at premium prices in developed markets.

After being appointed as Indonesia’s Minister of Marine Affairs and Fisheries in 2014, Susi Pudjiastuti declared three pillars as being policies in the management and utilisation of marine and fisheries resources: Sovereignty, Sustainability and Prosperity. Pole and Line (P&L) fisheries, where fish are caught one by one, fits squarely in the three pillars.

Pole & line fishing operations in Indonesia have been in existence for a long time. Boat owners and crews of P & L fishing vessels are locals, hence traditionally the fisheries has a high degree of sovereignty in the utilisation of the country’s tuna resources. In addition, P&L fishing vessels are labour intensive and the crews are mainly recruited from nearby coastal communities, contributing significantly to the livelihood and welfare of people around the fishing grounds. For example, a medium size P&L vessel (30 GRT) can absorb about 20 workers/crews.

The irony – a shrinking industry amidst growing demand

Demand for P&L caught tuna, along with other eco-label certified seafood products, has been growing in developed markets, particularly in Europe where many major retailers have committed to sell only P&L caught and eco-label certified tuna products. Martin Purves, the Managing Director of the International Pole &Line Foundation (IPNLF), at his presentation during the Tuna Round Table jointly organised by UNIDO SMART-Fish Programme and AP2HI (the Pole & Line and Handline Fisheries Association of Indonesia) in Jakarta in February 2017, predicted that the demand for P&L caught tuna will reach 145 000 tonnes this year, from 60 000 tonnes in 2014.

Unfortunately, growing demand and strong support, particularly from NGOs, do not translate into flourishing industry sectors at upstream level in P&L tuna capture fisheries. In fact, P&L tuna fisheries is generally a shrinking business in many parts of the world, including in Indonesia (currently Japan is the largest P&L tuna producer while Indonesia and Maldives are ranked second and third). IPNLF’s Technical Report No. 6 estimated that the global P&L tuna catch in 2013 was 360 810 tonnes, with the Indonesian contribution being around 90 000 tonnes. Official figures from the Ministry of Marine Affairs and Fisheries (MMAF) reported a higher figure in that year, while also noting that the trend has been declining for the past five years with the average P&L catch being around 139 500 tons annually (Table 1 and Figure 1). 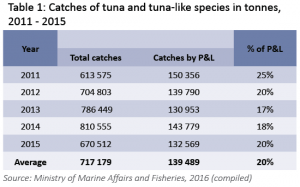 The P&L vessels catch mainly schools of skipjack and small tunas which are channeled to local canneries, katsuobushi processors, exported as frozen products, or used for local consumption (fresh or smoked). P&L caught tuna is also canned by local businesses for other companies and retailers’ brands. 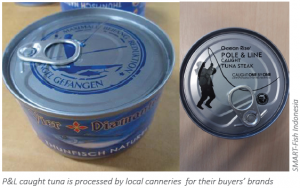 Presently, there are only 102 pole & line fishing vessels operated by AP2HI members in Indonesia, mainly in the eastern parts of the country such as Flores, Sulawesi, Ambon and also Sorong. There are approximately 836 P&L fishermen.

The main factor for the declining number of P&L vessels is mainly due to increasing fishing costs, and competition from other vessels using more effective fishing gears that catch the same fish in the same fishing area. There have been many reports of conflicts between P&L fishermen and purse seiners in different areas of Indonesia. Notwithstanding the fact that some P&L vessels are also catching tuna from FADs, the setting of unregulated FADs in eastern Indonesia has also affected the P&L fisheries sector. 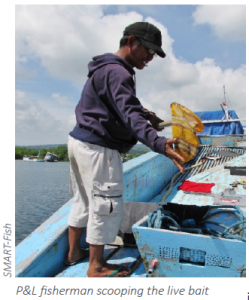 Pole and line fishing is well known to involve high operating costs due to its dependence on live wild fish, usually small pelagics, as bait. The bait is purchased from fishermen aboard a bagan, a special boat or platform which uses lift nets and lights to catch the fish. The bait price varies depending on the season/areas but generally it is becoming expensive due to lower availability, i.e. declining small pelagic stocks in some areas and the increasing demand for fish for human consumption in Indonesia. One big container of live bait (with water) costs IDR 350 000 – 1 000 000 and each P&L boat needs up to five such batches of live bait. Mortality of the live bait is also high, adding to the cost of the fishing.

Another extra cost is the enforcement of new government levies (taxes) called PHP for fisheries products. Instead of receiving incentives for being the most sustainable fisheries, P&L tuna vessels are taxed more compared with other fishing gears. For example, the PHP for pole and line fisheries has increased from the previous levy of IDR 339 800 (US$25.5) to the current IDR 953 100 (US$71.7) for every GRT. This is in contrast to the PHP for purse seiners; for small purse seiners the levy is currently IDR 441 675 (US$33.3) while for large purse seiners it is IDR. 922 420 (US$69.4) per GRT.

In addition, the blanket ban on transshipment imposed by the government as part of its commitment to fight against IUU fishing, has forced fishing vessels to return to port instead of being able to unload catches onto collecting boats at the fishing grounds. This adds again to the overall operating cost per trip. 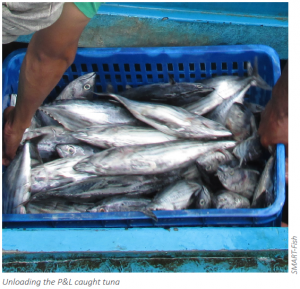 The upstream and downstream business players of Indonesian P&L fisheries joined together to form AP2HI in 2014 to ensure sustainability of their industry. The Association has been putting its efforts into reviving the P&L industry in three areas: (i) eco-label certification for premium prices and better market access; (ii) exploring the possibility of obtaining alternative live fish bait from farmed fish to reduce costs and improve availability; and (iii) closely working with the government to lobby for changes to unfavourable rules and regulations for P&L tuna fisheries.

AP2HI and other stakeholders in Indonesia, including international NGOs, have been working hard towards obtaining Marine Stewardship Council (MSC) certification for the country’s P&L tuna fisheries. This is in response to the growing demand for sustainable products, including for P&L tuna, in international markets. Hopefully this will also lead to better market access and attract premium prices. In reality, however, obtaining eco-label certification and meeting minimum international standards have proven not to be so simple. Proof of healthy stocks, minimum environmental impact and good governance of the fisheries are key and prerequisite conditions for obtaining eco-label certification.

Fisheries Improvement Programmes (FIPs) have been implemented for many fisheries (including tuna) in Indonesia, supported by various international and local organisations in an attempt to improve fish stocks. The P&L and HL FIP Steering Committee has been established and its members consist of industry representatives, NGOs, academics and government representatives with the main aim of guiding the industry in the implementation of the FIPs in order to meet the standards for eco-label certification.

For instance, traceability has been a key area in which AP2HI has been working for the past five years. To establish transparency and traceability, fishing vessels belonging to AP2HI members have been registered under ISSF and R-Via. In this initiative, AP2HI works closely with the Indonesian government, the Ministry of Marine Affairs and Fisheries (MMAF) as well as various national and international organisations including the United Nations Industrial Development Organization (UNIDO) SMART-Fish Programme, the IPNLF, USAID-funded Oceans Programme, the Walton Foundation, the Packard Foundation, the MSC GFSF, the Australian National University and others.

As mentioned above, the availability and price of live bait (from wild catches) for the P&L fishery is a big concern for the industry. AP2HI is looking at farmed milkfish as an alternative, and trials have been carried out in Larantuka (Flores), Bitung (North Sulawesi) and Sorong (Papua) with some measure of success. Further studies and fishing trials are needed to ensure that the alternative bait is economically viable, as in some circumstances the milkfish bait is still more expensive due to limited economies of scale compared with the wild bait. Changing the mindset of P&L fishermen to use farmed milkfish as bait also takes time and effort. 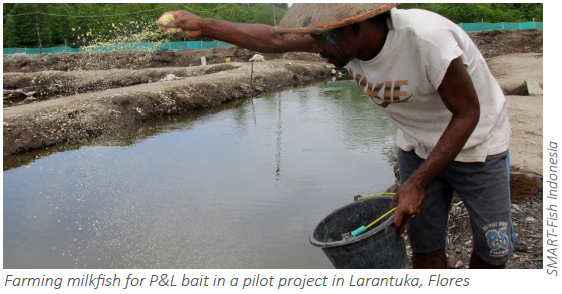 Working with the government to promote sustainable P&L tuna

P&L industry players, through AP2HI, have established various collaborative efforts with the government, particularly the MMAF. At policy level, regular dialogues have been held to convey aspirations and discuss problems faced by the industry. The last public-private dialogue was jointly organised by AP2HI and UNIDO SMART-Fish Programme in February 2017, involving all stakeholders, especially AP2HI members and MMAF officials. The results were submitted and further discussed with the MMAF’s Director General of Capture Fisheries to ensure that whatever recommendations and suggestions raised during the dialogue were brought to the attention of the policymakers.

There has been ongoing collaboration in data collection obtained directly from P&L fishing vessels, monitoring of the
collecting vessels, and placement of observer programmes on P&L vessels belonging to AP2HI members. There has also been a focus on stock improvement in territorial waters and various meetings and discussions to establish harvest strategies (HS) and harvest control rules (HCR) for tuna fisheries. Harvest Strategies is basically an area of science which looks at effective management procedures while HCR is a kind of operational guideline framework of HS that determines how much fishing can take place for targeted species. Robust HS and HCR should be in place if P&L tuna fisheries are to be eco-certified by the MSC or other bodies. MMAF has an ambitious target to complete, aiming to officially issue the HS and HCR for its tuna resources by this year.

To promote coastal tuna fisheries, mainly P&L and handline caught tuna in Indonesia, the International Coastal Tuna Business Forum (ICTBF) has been held regularly since 2012, jointly organised by AP2HI, MMAF and other relevant ministries, and IPNLF. International tuna buyers, government officials and research institutions, as well as local and international NGOs from many countries participate in the Forum to receive updates, establish networks, and explore business opportunities for pole & line caught tuna from Indonesia. The next ICTBF will be held in May 2018.

Despite huge challenges faced by the industry, P&L tuna fishermen, processors and exporters have high hopes for a better future in the wake of growing demand for sustainable tuna. With support from national and international organisations, donors and NGOs, AP2HI is confident that eco-label certification can be achieved by 2019. This will help to improve market access and increase the value of pole & line products from Indonesia. The Association is further committed to producing better quality and ecofriendly traceable tuna products, and to contribute to the improvement of the welfare of fishery business actors and coastal communities in Indonesia.

This article was published in Infofish International 6/2017 (www.infofish.org)